Reconstruction of the Metrorail system will continue over the weekend of January 31 – February 2 with service adjustments beginning at 10 p.m. Friday night and continuing through system closing on Sunday.

Halfway through the to-do list, you run back to the car to avoid going over the two-hour limit. But just where can you move it legally? In the District, drivers without a certain permit may need to leave the given ward completely to legally park on the street.

“It doesn’t matter if you come out after two hours and move it to another spot in the zone,” says Mary Cheh, chair of the Committee on Transportation and the Environment. “You’re still two hours in the entire zone.”

That’s the part many drivers — especially those who live outside the District — may not understand.

Moving a car around the corner, while remaining in the same Residential Parking Permit zone, is a violation and susceptible to a ticket.

The boundaries of the RPP zones coincide with ward boundaries.

“Sometimes people are surprised because they think, ‘Oh my goodness, I only have two hours, so I’ll go out and move it up the block,'” Cheh says. “That won’t count; you’ll still get a ticket.”

The more complicated situation involves parking at locations far apart but in the RPP zone. By the letter of the law, a parking enforcement officer could write a ticket — but District officials say that’s unlikely.

The parking rules aren’t new — they’ve been in place for decades. But the area is attracting thousands of new residents each year, and a full understanding of parking regulations is lacking.

The RPP zones are designed to preserve spaces for drivers in their own neighborhoods. For businesses, parking limits and meters ensure customer turnover. (It’s not lawful to refill the meter after the zone maximum has been reached.)

But that does create complications for people coming from out of town or a different ward — no matter how much they plan to spend in the local economy.

Parking is, as ever, a sensitive and polarizing topic. On Wednesday, a council committee heard testimony from District residents who want parking enforcement officers to be more aggressive in writing tickets to drivers who aren’t from the neighborhood.

Conversely, if drivers worry about being ticketed for shopping, playing or even working too long in an RPP zone, they may not come at all, Cheh says.

If I park in an RPP zone without a permit and I move my car to another space after the two-hour limit, will I still get a ticket?

Yes. The two-hour restriction pertains to the entire zone, not just the particular space.

May a District resident of one zone park for more than two hours in another zone?

No. A permit is only valid in the zone for which it has been issued.

How are the RPP zones established?

The boundaries of the eight zones coincide with existing ward boundaries.

Part of Massachusetts Avenue in Southeast D.C. is closed Friday because of a major sinkhole.

The road is shut down between 34th Street and 34th Place SE, according to D.C. Police. It is not known how long the roadway will be closed, but officials advised riders to use alternative routes.

D.C.’s Department of Transportation tweeted a photo to give you passersby an idea of just how big the hole looks. 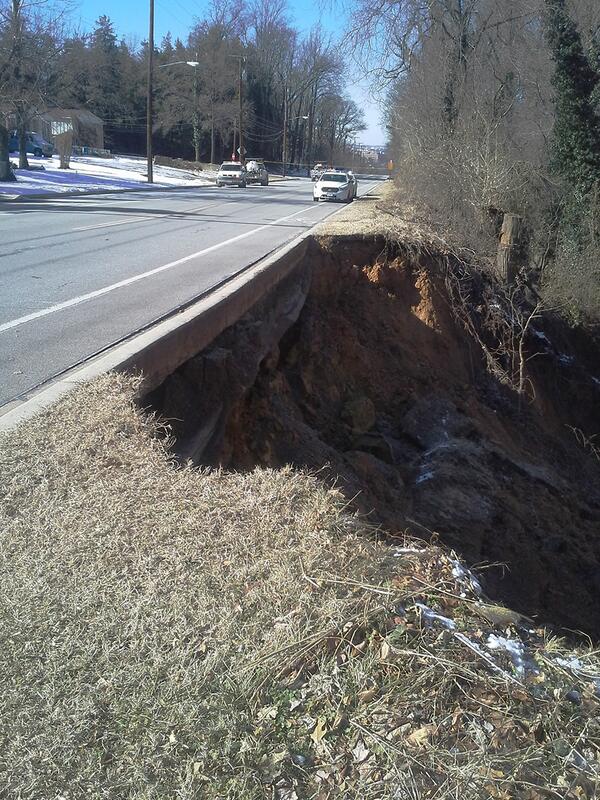 The latest sinkhole in D.C. opened up Thursday evening.

It isn’t the only one.

There have been a number of sinkholes at intersections, on sidewalks and parking lost in the D.C. region.

As my colleague Mark Berman pointed out Thursday. Here’s a look at some of the sinkholes in the area recently:

*One of the biggest was in downtown at 14th and F streets in Northwest that closed the intersection for days.

*There was one in a parking lot near the intersection of M Street and New York Avenue in Northwest that allegedly tried to consume a Honda.

*And there was one last March in Adams Morgan. A good view of a corgi near the hole.

This was my disaster last night!

WASHINGTON – Metro has found the root of the problem that caused trains to single track along the Red Line between Shady Grove and Twinbrook.

A misaligned third rail was put back in place near the Twinbrook station, and trains are now running again, says Metro’s Dan Stessel.

WASHINGTON – A new problem on Metro’s Red Line is causing trains to single track between Shady Grove and Twinbrook.

It may be a crack in the third electrified rail, he says. A number of collector shoes, which are attached to each car and run along the third rail to power the cars, have fallen off, he says.

Inspectors are walking the line, collecting the shoes, which are designed to fall off if they catch anything, he says. They are looking for the root problem that’s causing the shoes to separate from the cars.

Multiple cars along the Red Line are out of service because they’ve lost their collecter shoes, Stessel says.

Metro has called in inspectors from other lines to assist on finding the problem and attaching the shoes, so the trains can be up and running by the Thursday afternoon rush hour.

They can’t rule out that cold temperatures played a role in the issue, Stessel says.

VIENNA, Va. – At the first of two public meetings to update commuters on I-66, the Virginia Department of Transportation (VDOT) told drivers about options such as adding general-purpose lanes, adding toll lanes and transit options such as extending Metro, VRE or light rail.

Late last year, 19 companies responded to a VDOT request for information on how to ease congestion on I-66, and each touted the benefits that toll lanes would bring to the corridor from the Beltway out to Haymarket.

The 495 Express Lanes were the first major experiment in Northern Virginia into the toll-lanes concept, with more such lanes opening in early 2015 on I-95 between Stafford and Alexandria.

“Whether we have managed (toll) lanes has not been determined. We have 10 concepts (rail and road) and we will look at all of them. We realize not one concept in and of itself will be the answer. It has to be a combination of many modes of transportation,” says Rene’e Hamilton, Deputy District Administrator for VDOT in Northern Virginia.

But she admitted that she thinks the 495 Express Lanes have been a success at offering drivers and bus riders a convenient and predictable option to avoid traffic for a fee.

“When the I-95 Express Lanes come onboard, we’ll start to see a network of managed lane projects that connect together. Will I-66 complement that? We don’t know at this time, but that will be figured into our study. As we look into each option, the connections between these interstates will be taken into consideration,” Hamilton says.

Fairfax County Supervisor Pat Herrity is a strong supporter of toll lanes to I-66.

“An express-lanes concept is absolutely what we need on I-66. It provides a corridor for express bus and other mass transit. It maintains free carpooling and it offers congestion relief,” he says.

“It offers guaranteed speeds. If you don’t want to pay the toll and get to work, you’ll still get less-congested roads in the regular lanes too. So we’re not forcing people to pay the toll. The average person gets that choice every day.”

But drivers coming out to the public meeting weren’t sold on the toll lanes as a solution.

“It puts people who cannot afford the lanes at a disadvantage,” says Leigh Kennedy, who commutes from Fairfax to Falls Church. “People with higher-paying jobs get to avoid the traffic and other people don’t. I think that’s an unfair system.”

Other drivers worry tolls on I-66 will constantly go up, like on the Dulles Toll Road or the Dulles Greenway.

“Let’s face it — once toll lanes are there, they can always finds ways to raise it, making the tolls higher and higher, and give whatever reason they want,” says Judy Perich, citing the Dulles Toll Road drivers paying for Phase II of the Silver Line.

She’s also worried drivers would avoid the toll lanes, similar to how drivers avoid the Dulles Greenway. Del. David Ramadan sued the owners of the Greenway to get the tolls lowered, but lost the first round of the fight on Wednesday. The decision over Greenway tolls will likely head to the Virginia Supreme Court later this year.

On I-66, most commuters seemed to agree that better mass transit options, such as extending Metro’s Orange Line, would have a huge effect on traffic.

“If they made it really convenient for [commuters] to park out in Gainesville or Manassas, then people, rather than putting up with the traffic, they would get on public transportation,” says Jim Lynch.

He suggests the crunch of people coming from Gainesville and Manassas to Vienna, Dunn Loring and East/West Falls Church could be eased if with Metro extends west. While the Silver Line will take away some of the volume from the Orange Line, riders who live along I-66 will likely stay put.

“When somebody says ‘go into D.C.,’ I cringe because of I-66 traffic. I think the Orange Line was meant to go out west. They have the roadway set up there. I would go [to D.C.] a lot more often if I had Metro as an option,” says Perich.

“Either extension of Metro, some type of light-rail or bus rapid transit, ideally Metro would be preferably, but any improvements would help,” says Kennedy.

“The one critical bridge that needs to be replaced is the 123 overpass at I-66. It’s the only 1960s-era still left in this region. If that were totally replaced, it would solve a critical problem we have with traffic in the morning and afternoons,” says Doug Francis, of Vienna.

He says there are too many accidents after the Vienna Metro station and bottlenecks are too common and could be fixed with a new bridge.

VDOT hopes to narrow down the list of options and begin a more specific study before the end of 2014. It hopes to get bids in 2015 and move quickly towards construction shortly thereafter, which could take at least 18 months.

VDOT will hold one more meeting next Wednesday evening at the Wyndham Garden Hotel at 10800 Vandor Ln. in Manassas.

@Metrorailinfo: Red Line: No longer single tracking. Residual delays continue in both directions due to earlier track work outside Twinbrook.